with the author –
Joel Colón-Ríos

AUTHOR:
Prof Joel Colón-Ríos is Professor of Law at Victoria University of Wellington and Director of the NZ Centre for Public Law. His main research interests are constitutional theory and comparative constitutional law, areas in which he has published widely.

This webinar is organized by the Centre for Comparative and Public Law, HKU and will be held via Zoom Meeting. Prior registration is required. Click here to register. 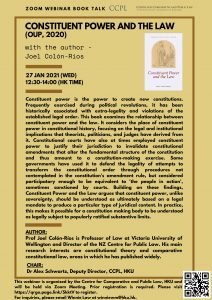