What is a “riot”, and when does a person in a peaceful demonstration become liable for up to 10 years of imprisonment for “taking part in a riot”?  The publicly stated position of the SAR Government is that as soon as 3 or more persons in a demonstration commit certain proscribed acts, the whole demonstration becomes a riot, and everyone present may be liable for taking part in a riot punishable by up to 10 years imprisonment, regardless of the role he or she actually played.  On this understanding, some 30 to 40 persons were charged with rioting in the Mongkok New Year event in 2016; in relation to the Extradition Bill protests this year, up to 18 October, over 230 persons have already been so charged.  Clarification on Hong Kong’s law of rioting is plainly crucial.  Yet there has been little serious attempt to do so.
Hong Kong’s law of rioting is governed by section 19 of the Public Order Ordinance, Cap 245 (“POO”) enacted in November 1967, in the wake of the most serious riots in Hong Kong’s history, and was deliberately framed to be wider than the common law riot offence.  In the 50 years that followed, the development of human rights law, major reform of the law of public disorder in the UK in 1986, the end of colonial era, the coming into force of the Basic Law enshrining rights and freedoms – have intervened.  By remaining unreformed, s.19 and related provisions of POO, as well as sentencing for these offences, have become seriously out of line with the rest of the common law world.   The effect on the exercise of freedom of expression and of peaceful assembly must be not only a matter of wide community concern, but should also be a concern for legal academics and practitioners.  This talk hopes to stimulate much overdue research in this area of the law.
Speakers:
Margaret Ng was called to the Hong Kong Bar in 1988.  She was the Member of the Legislative Council returned by the legal functional constituency 1995-97, 1998-2012.
Jason Ko graduated from the University of Hong Kong, and was called to the Hong Kong Bar in 2019.
Lau Kin graduated from the University of Hong Kong, and was called to the Hong Kong Bar in 2019.
Moderator:
Prof Simon Young, Associate Dean, Faculty of Law, The University of Hong Kong
For Registration, please click HERE
For inquiries, please email Winnie Law at 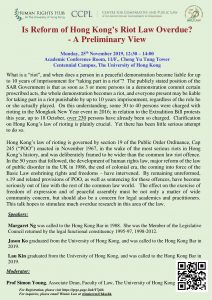