The event has been postponed due to unforeseen circumstances. We will announce a new date later. Thank you for your support!

The global norm is that, by law or by practice, judges will be citizens of the state they serve. Yet, in Pacific island states, as in Hong Kong and over 20 other jurisdictions across the world, foreign judges regularly sit on the highest domestic courts and determine significant constitutional cases.

In this seminar, Anna Dziedzic presents her research on the use of foreign judges in nine independent Pacific island states. She explains who the foreign judges serving in the Pacific are, how they are appointed, and the special terms and conditions of their service. Applying an analytical framework based on the significance of nationality to the functions and qualities of constitutional judges, she argues that the use of foreign judges has implications for the ways in which courts approach constitutional adjudication, judicial independence, and the representative qualities of judges and judiciaries.

Hong Kong’s Court of Final Appeal also uses foreign judges, although it does so in different ways and in a different context to the judiciaries of Pacific island states. Comparing the experiences of Hong Kong with Pacific island states, however, provides a way to test whether the analytical framework developed to assess the practice in the Pacific has broader application, and potentially, to draw some insights into the benefits, challenges and sustainability of the practice of foreign judging in Hong Kong.

Dr Anna Dziedzic is a Global Academic Fellow at the Faculty of Law, The University of Hong Kong. She recently completed her PhD at Melbourne Law School. She researches in the field of comparative constitutional law, with a particular interest in the constitutional systems of Pacific island states. In addition to her PhD, she holds an MA in Human Rights from University College London and first class honours degrees in Arts and Law from the Australian National University. She has previously worked at the University of Melbourne, the Federal Court of Australia and as a legal policy officer for the Australian Government. 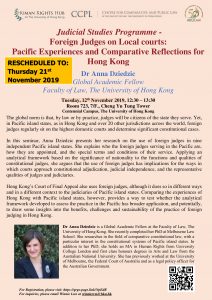