with the author – Christopher Casey

It is a fundamental term of the social contract that people trade allegiance for protection. In the nineteenth century, as millions of people made their way around the world, they entangled the world in a web of allegiance that had enormous political consequences. Nationality was increasingly difficult to define. Just who was national in a world where millions lived well beyond the borders of their sovereign state? As the nineteenth century gave way to the twentieth, jurists and policymakers began to think of ways to cut the web of obligation that had enabled world politics. They proposed to modernize international law to include subjects other than the state. Many of these experiments failed. But, by the mid-twentieth century, an international legal system predicated upon absolute universality and operated by intergovernmental organizations came to the fore. Under this system, individuals gradually became subjects of international law outside of their personal citizenship, culminating with the establishment of international courts of human rights after the Second World War.​

This webinar is organized by the Centre for Comparative and Public Law, HKU and will be held via Zoom Meeting. Prior registration is required. Click here to register.  For inquiries, please email Winnie Law at . 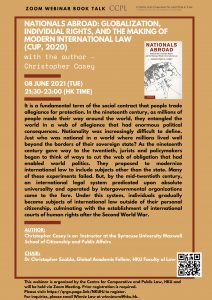