The paper asks a simple question: Can courts protect democracy? At the backdrop of a constitutional crisis in Israel and global democratic erosion, the article confronts three challenges – which notion of democracy are we to protect (liberal v. illiberal; substantive v. formal) ; can courts actually protect democracy and what should courts do when they are under political pressure. Throughout the discussion, the article also seeks to reveal the false dichotomy of those who argue that courts cannot prevent a democratic failure.
Dr. Yaniv Roznai is a Senior Lecturer at the Radzyner School of Law, Interdisciplinary Center (IDC) Herzliya.  He holds a PhD from LSE.  Dr. Roznai was a visiting researcher at LAPA, Princeton, and a Post-Doc Fellow at the University of Haifa and at NYU.  He  is the Co-Founding Chair of the Israeli Association of Legislation and an elected Council Member of the International Society for Public Law (ICONS).  In 2018, his book, “Unconstitutional Constitutional Amendments – The Limits of Amendment Powers” (Oxford University Press, 2017), was awarded the Inaugural ICONS Book Prize.  He is the winner of the 2018 Israeli Association of Public Law Gorni Prize for Young Researchers, and the 2019 Justice Cheshin Prize for Excellence in Legal Research for Young Researchers. His book “Constitutional Revolution” (with Prof. Gary Jacobsohn) is forthcoming with Yale University Press.
For Registration, please click HERE
For inquiries, please email Winnie Law at 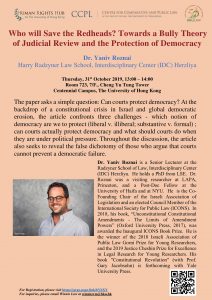