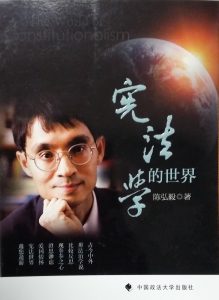 Professor Albert Chen’s （陳弘毅）new Chinese book, The World of Constitutional Law Scholarship 《憲法學的世界》, published in Beijing in 2014 by the Chinese University of Political Science and Law Press, was selected as one of the “Ten Best Books on Rule of Law in 2014” （2014年度十大法治圖書）by the Legal Daily 《法制日報》, the leading legal newspaper in China.

The Selection Committee for the Award commented that this book is not only about “ordinary legal events”, but also about the “re-structuring of the political order”. On the one hand, it examines “constitutional moments” and countries at “historical crossroads” of their constitutional development. One the other hand, it also points to the differences in the social and cultural contexts of the growth of constitutionalism in the West and the East, and explores possible indigenous resources for constitutionalism in China.