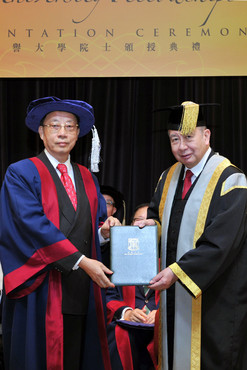 “Mr Chan, SC is an eminent barrister in Hong Kong. He holds an LLB awarded by this University in the year 1972 when the University produced its first batch of locally trained law graduates. Mr Chan proceeded to complete the Master of Laws (LLM) at the University of London and was called to the English Bar in 1974 and the Hong Kong Bar in 1975. In 1989, he was appointed Queen’s Counsel (now Senior Counsel), the first HKU law graduate to be thus honoured.

Mr Chan has maintained a very active practice at the top echelon of the Bar and has served as Deputy High Court Judge (1991), as High Court Recorder for over a decade (1995-2006) and as the Chairman of the Hong Kong Bar Association (2003-2005). He is currently Head of Sir Oswald Cheung’s Chambers, and has always encouraged young barristers to engage in public service.

Many public bodies and committees have benefitted from Mr Chan’s leadership and experience, including, inter alia, the Stock Exchange of Hong Kong, the Town Planning Appeal Board Panel and the Mandatory Provident Fund Schemes Authority.

The PCLL Academic Board serves the important function of overseeing and monitoring the PCLL, which is the route to legal professional practice in Hong Kong. Mr Chan was instrumental in assisting the Faculty in the massive reform of the PCLL curriculum in its early stages, and has since been very generous with his advice on how best legal education should develop in order to meet the rapidly changing needs of the profession and the community.

Mr Chan always told us what we needed to hear, not what we wanted to hear – which makes his advice all the more invaluable.